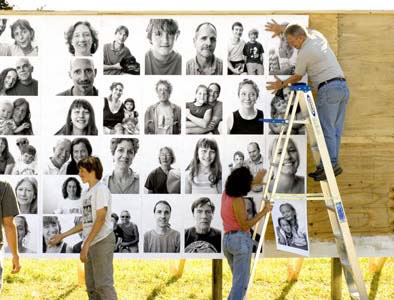 Claremont, CA (October 19, 2007)—The Claremont Museum of Art is bringing the interactive photography project PhotoBooth to the community of Claremont, California, beginning on October 19. PhotoBooth documents communities across the United States by creating a public mural of portraits of people in the community.

The PhotoBooth project coming to Claremont will allow the community to view approximately 200 portraits of their fellow community members on a 72-foot-long wall in the Packing House’s east plaza. The photography shoot will take place in front of the Claremont Public Library on October 19 and 20, and participation is limited to the first 200 people that show up to the booth. The installation will be unveiled on December 1 and remain on display for a minimum of two weeks—possibly longer, depending on the weather.

Claremont Museum of Art Executive Director William Moreno thinks the community will welcome the project warmly. “Claremont is a very community-minded city, and we think its residents, workers, and students will be intrigued. The project is open to all, and, in line with the Museum’s philosophy, we hope to attract residents from throughout the region.”

PhotoBooth was created by San Francisco-based photographer Christopher Irion. With PhotoBooth, Irion documents a community by taking portraits of community members and, several weeks later, creating a public mural of the photos. The images, each usually 16” x 24”, are digitally printed on rolls of paper so they can be hung like wallpaper onto one contiguous surface. Surfaces have included everything from an interior wall of a San Francisco coffee shop to a large wooden wall constructed in an open space in the small town of Putney, Vermont.

Irion created the PhotoBooth studio to be portable and lightweight. Since 2004, he has traveled more than 8,000 miles and made more than 2,000 portraits across America in communities that include San Francisco; Silver City, New Mexico; Putney, Vermont; Providence, Rhode Island; New York City; and a cross-country trip that included several different cities and states.

Irion has three requirements for every project: the photography must take place in a location that is a gathering spot or crossroads of that community; every person who is photographed is included in the installation; and the installation is located in a frequented community spot with pedestrian access, rather than a place apart such as an art gallery. In describing when people viewed past projects, Irion explains, “It was not about art for those viewers, it was about community. I wanted to make sure I honored that by putting it in a public place.”

Irion sets up the booth in a very public place, and community members who happen to walk by and wish to participate are asked to fill out a quick waiver form, authorizing their photo to be taken and included in the public installation as well as possibly a future PhotoBooth book. Irion takes approximately 10–20 frames of each person (or couple or family) but uses only one, and people are in the booth for less than a minute. “Some people come in with their children, their pets, their significant others, or alone. It lends for an interesting variety of portraits.”

“The resulting portraits are remarkably beautiful and revealing,” says Moreno, who first learned of the project while living in San Francisco. “I’m impressed with what Irion is able to capture in a small, enclosed space. And so are the participants. Many tell him it’s the best photo they’ve ever seen of themselves.” As a way of recognizing the collaboration with each participant, all are sent a complimentary 5” x 7” print.

In explaining how he’s able to capture such significant photos in this temporary space, he says, “The PhotoBooth functions a bit like a private sanctuary, but in a public place. Surrounded by white walls and behind a curtain, unable to even see the photographer, subjects can approach the moment with openness and curiosity—and we see them in the resulting portrait without their public mask. A much more revealing portrait is often possible.”

More than anything, Irion is motivated by the concept of community. “I am interested in strengthening the ties of a community by showing the group back to itself in a direct and democratic fashion, with the idea that viewers can directly gaze at the faces of fellow citizens and have a moment to reflect on their relationship to one another with the hope that we might see each other in a fresh and less judgmental way. The installation functions as a place to meet one’s neighbors as a town green might once have allowed, so as to share with others the gaze of the community.”

Roger Hillyard of Farley’s Cafe in San Francisco—home of the first PhotoBooth project, completed in 2004—says, “When the show was up, people would walk in the coffee shop and just stop. They’d look around in awe, their jaw would kind of drop, and then they’d break into a big smile. …[The installation] was so great and wonderful. It had a very warm feeling to it. It warmed everyone’s heart and brought a sense of community.”

For the Claremont project, portraits will be taken outside the Claremont Public Library beginning on Friday, October 19, at 10 a.m. “We have approval to use the space on October 19 and 20 from 10 a.m. to 3 p.m., says Moreno. “However, we will close the PhotoBooth as soon as the 200th portrait has been taken.” Project guidelines require that every portrait taken be used in the installation in order to avoid anyone feeling excluded from the end product. “No one is edited out,” says Moreno. “Once you walk into the booth, you know you’re going to be part of a public art installation.”

Moreno says the library was chosen as the photography site because it’s a public place that welcomes a diverse cross-section of the community. “The post office is also right across the street, which is another frequented community hub by people of all ages and backgrounds,” he says. (The Library is located in the heart of the Claremont Village at 208 North Harvard Avenue.)

The completed Claremont PhotoBooth installation will unveil on December 1 in the east plaza of the College Heights Lemon Packing House, located on the south side of West First Street at Oberlin Avenue, and home to the Claremont Museum of Art, the Claremont Forum, a jazz club, and several restaurants, boutiques, galleries, and live/work lofts. The wall, at 72 feet wide and eight feet tall, will accommodate 200 photos.

The photo installation will be on view at least through December 16, possibly longer, depending upon the weather. “The longest it would remain up is through January 31,” said Moreno. “We would love it to stay up as long as possible, but it will depend on how harsh the winter is.”

About the Museum: The Claremont Museum of Art is a regional museum of international significance, exhibiting art connected to Claremont as well as art from around the world. In addition to a diverse slate of exhibits, the museum features an eclectic store offering contemporary and unexpected gifts from around the world. A comprehensive slate of educational programming and events are offered for all ages. Claremont Museum of Art is an independent, nonprofit 501(c)(3) organization.